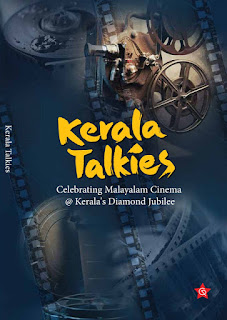 A reflection of cinema

By Express News Service  |   Published: 16th December 2016 01:20 AM  |
Last Updated: 16th December 2016 03:12 AM
THIRUVANANTHAPURAM: “Cinema - the greatest chronicler of life and times, born of the marriage between art and technology, has come down to us as the newest audio visual expression of creativity and culture. It is the logical extension of mankind’s seamless scientific imagination and a ceaseless search for communication. This vehicle of communication is primarily meant to reach out to people which eventually took on the role of being the medium and the message as well as unifying itself into a unique entity,” observes veteran auteur Adoor Gopalakrishnan in his short account in Kerala Talkies.
‘Kerala Talkies - Celebrating Malayalam Cinema at Kerala’s diamond jubilee’ is a collection of studies and observations by noted filmographers, critics and authors on cinema. Brought out by Chintha Publishers in connection with the ongoing 21st International Film Festival of Kerala, it was released by Adoor Gopalakrishnan by handing over a copy to noted filmmaker Shyam Benegal at Tagore theatre, the other day.
Undoubtedly a collectable item, the book is an effort to reinvent Malayalam cinema. At the same time it is an attempt to reflect upon Malayalam cinema today, at the 60th anniversary of Kerala’s formation. A host of prominent names including Amrit Gangar, Shaji N Karun, Kamal, Lenin Rajendran, M G Radhakrishnan, Bina Paul, Sunny Joseph, Ravi Menon, M A Baby, V K Joseph, C S Venkiteswaran, Meera Sahib and Vijayakrishnan have written in detail about Malayalam cinema and cinema in general.
Edited by A Chandrasekhar, ‘Kerala Talkies’ looks into a number of different aspects of cinema - be it the roots of Malayalam cinema, its festival representation, history of film society movement in the state, the politics of gender in Malayalam cinema, the icons of Malayalam movies or its dynamic frames.
In what could be termed as a true reflection on the 60 years of Kerala’s film history, the book sheds light into the rich past and vibrant present of Malayalam cinema.
Posted by A.Chandrasekhar at 7:04 am

I really wanted to very small amount, degree down a quick note to be able to good you for all of the dear small signs (of) you are placing on this place in the net. My long the net operation of making observations has at the end of the day been given great respect with good (pointed) ends to write about with my close friends. the way you say to about thing talked of was really good. So keep on sharing hope to see more from you. if you searching how to apply new pan cared you can refer apply new pan card this site will help you any doubt realated to pan card .The PAN helps the IT department link all transactions with a person.