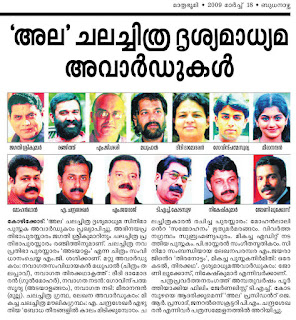 Abhinaya Pratibha award for Jagathy
Staff Reporter/THE HINDU 18-03-1009
Kozhikode: The Amateur Little Cinema (Ala) awards for outstanding contributions in the field of film, TV journalism and film-related literature, for the year 2008, were announced at a press meet here on Tuesday.The ‘Abhinaya Pratibha’ award, bagged by Nedumudi Venu last year, will go to Jagathy Sreekumar for his contributions to Malayalam cinema. The ‘Chalachitra Pratibha’ award will be given to director Ranjith for films likeThirakkadha and Kayyoppu.

Nikesh Kumar of Indavision and Johny Lukos of Manorama News have been selected for the Ala award for excellence in TV journalism. The award for the best seminal book on film will be given to A. Chandrasekharan for his ‘Bhodha Theerangalil Kalam Midikkumbol,’ published by Rainbow books.

Ala president J.R. Prasad said the awards will be given away at a function at the Town Hall in Kozhikode at 6 p.m. on April 6. A workshop on script writing will be held at the venue from 10 a.m.An international film festival will be held in connection with the award ceremony at the Auriga Hall on April 4 and 5, the organisers said.

Posted by A.Chandrasekhar at 10:09 pm 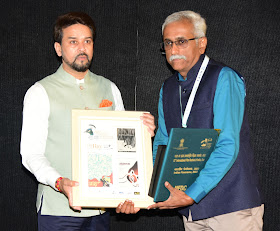